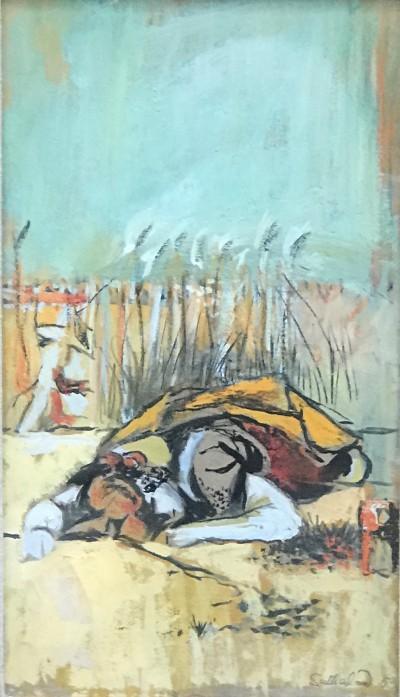 Graham Sutherland went on to be one of Britain’s most renowned modernists, an official second world war artist and member of the Order of Merit, who eventually felt distinguished enough to found a museum dedicated to himself.
Graham Sutherland first attended Epsom School and then studied art at Goldsmith’s School of Art (1921-26) where he quickly became a highly skilled etcher. His early etchings, such as Lammas (1926), were clearly influenced by the idyllic, visionary rural landscapes of Samuel Palmer.

Sutherland specialized in etchings for a few years but following a lack of demand for them, he turned, in the early 1930s, to painting, designing ceramics and other commercial work. The latter work included designing posters for the Shell petrol company. In his work, Sutherland developed an interest in natural forms of growth such as tree roots and thorn bushes which he often depicted in close-up or from foreshortened viewpoints. These organic growth formations, which remained central to Sutherland’s work throughout his career, often appeared menacing or threatening with their hints of human or animal-like characteristics.

As an official War Artist (1940-45) Graham Sutherland depicted bomb damage in London and elsewhere but it was perhaps not until after the war that he started to become really well known. An important commission at this time was for religious work, being a large painting entitled Crucifixion (1946) for the Anglican church of St. Matthew in Northampton. Graham Sutherland himself had converted to Roman Catholicism in 1926. He continued to receive religious commissions and is best known to the general public for his vast tapestry, Christ in Glory (1962) created for the rebuilt Coventry Cathedral.
In 1949 Graham Sutherland painted a portrait of the writer Somerset Maugham and this proved to be the first of several famous people that he painted. Other portraits included Winston Churchill (1954), subsequently destroyed by his wife because she disliked it so much, Kenneth Clark (1962) and Konrad Adenauer (1965).

During the last two decades of his life, Sutherland had numerous retrospective exhibitions devoted to his work both at home and abroad. He was awarded the Order of Merit in 1960.