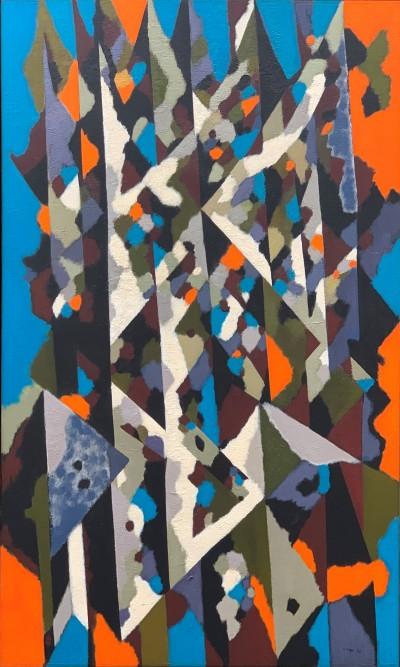 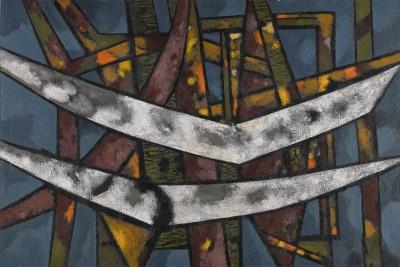 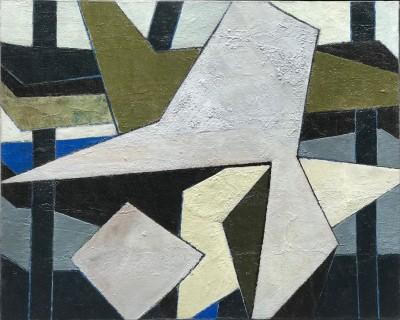 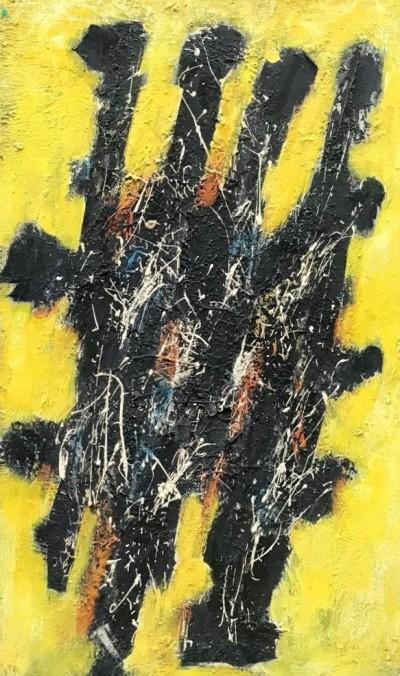 William Gear was one of the few British painters, the most passionate and committed one, who played an active role in the modern abstract movement of post-war Europe. He continued the tradition of the Edinburgh-Paris axis established by J.D. Fergusson, Samuel Peploe and others, spending vital years between 1947 and 1950 living and working in Paris. William Gear received the greatest acclaim in France, Germany and the Netherlands.

William Gear was born in 1915 in Methil, Fife, into a mining family; the particular landscape of pitheads, the sea, rocks, castles, trees, storms and poverty marked his earliest identity with a place and probably remained the most influential to his art. Art history lessons during student years at Edinburgh College of Art, in particular Byzantine classes under David Talbot Rice, also influenced his concern for structure.

On a travelling scholarship in 1937, William Gear chose to study under French painter Fernand Léger. The Second World War interrupted these formative years and, by 1940, Gear had joined the Royal Corps of Signals. Dispatched to the Middle East, he still had the discipline to paint - mostly works on paper of damaged landscapes - with exhibitions in Jerusalem, Tel Aviv, Cairo as well as in Italy in Siena and Florence.

As the British officer in Celle, working for the Monuments, Fine Arts and Archives Section of the Control Commission, William Gear focused on securing the safety of the Berlin Art Collection in Schloss Celle and organised an important series of modern art exhibitions, including the rejected work of Karl Otto Gotz. Demobbed in 1947, William Gear headed for Paris. Within a year there were exhibitions at two of the pioneering salons and a first one-man show at the Galerie Arc en Ciel.

At the same time, inclusion in Cobra shows in Amsterdam and Copenhagen in 1949, alongside Constant, Corneille and Appel, underpinned his affiliation to a reinvigorated form of abstract expressionism. William Gear worked at the time in the fluid medium of opaque watercolour, usually on a card with pockets of intense colour on a white or neutral ground. While some pieces were purely abstract, others carried their own suggestion of a landscape or even a form of Celtic figuration.

The same year saw an exhibition at the Betty Parsons Gallery in New York, USA, alongside Jackson Pollock. The impact of American abstract expressionism, however, remained a sore subject, which in conversation was usually dismissed with a curt reminder of what he and others were already painting in Europe.
On his return to England in 1950 he had the first of a series of London exhibitions with the Gimpel Fils gallery. William Gear was also awarded one of the Festival of Britain Purchase Prizes for Autumn Landscape, large oil on canvas which took six difficult months to complete. The event produced written questions and answers in the House of Commons and a tirade of abuse from the national press, not to mention a topic for debate on the radio programme Any Questions. While the episode made him a household name, the longer-term effects were, arguably, more detrimental.

William Gear chose not to live in London or join fellow abstract artists in St Ives, preferring the independence of a village in Kent between 1953 and 1958. This period saw the continued development of large landscape structures, as well as "side-roads" into sculptural subjects and minimalist colour paintings, which openly acknowledged the influence of Nicolas de Stael. His move to Birmingham came with the appointment as Head of the Faculty of Fine Art, Birmingham College of Art, in 1964, a post he held until retirement in 1975.

William Gear together with Stephen Gilbert was the only British artists included in the major Cobra 1948-51 exhibition at the Museé d'Art Moderne, Paris, in 1982. In 1995, William Gear took delight in attending the opening of the Cobra Museum of Modern Art in Amstelveen, near Amsterdam. William Gear was elected Royal Academician in 1995.