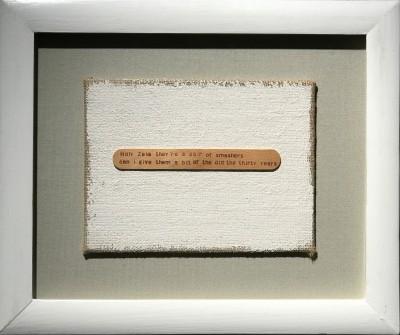 Keith Coventry attended Brighton Polytechnic and Chelsea School of Art, London. One of the original Young British Artists, he was included in the seminal exhibition Sensation at the Royal Academy of Arts, London, in 1997.

At first sight, Keith Coventry’s Estate Paintings resemble the abstract oils of Russian Suprematist Kazimir Malevich or perhaps the Dutch Modernist Piet Mondrian. Closer inspection reveals that the geometric patterns in these paintings are in fact taken directly from the utilitarian notice boards which are invariably found at the entrance to London council estates and which indicate the layout of flats using a simplified aerial plan.

Keith Coventry has painted over a hundred different Estate Paintings, each of which are presented in a box frame made by the artist, often with a museum-style caption fixed to the frame’s bottom edge. He subverts both the language of high Modernism and the reserved status of the museum object, highlighting the wide gap which exists between these often neglected estates and the utopian ideals of their original Modernist architects.

Since Keith Coventry began this series in the mid-1990s, many of the estates he has painted have already been, or are now scheduled for, demolition and redevelopment, although the Wenlake Estate, in Old Street, remains standing and has recently been refurbished. Reference to the existing estate map, shows that Keith Coventry has transcribed the layout quite faithfully, slightly rotating the image, but only making very minor simplifications to the shape of the blocks. As such, he treats each estate map as an object trouve, clearly amused to find this formal beauty in such a prosaic source.

Since the 1990s, Keith Coventry has employed the tropes of Modern painting to comment ironically on the realities of contemporary city life. Two paintings from this series East Street Estate, 1994 and Heygate Estate, 1995 are in the collection of the Tate Gallery, London. Demolition of the Heygate Estate began in 2011, but redevelopment has not been without controversy. Some residents, many of them elderly, campaigned to stay in their homes with a determined few occupying the buildings of this and the neighbouring Aylesbury Estate.