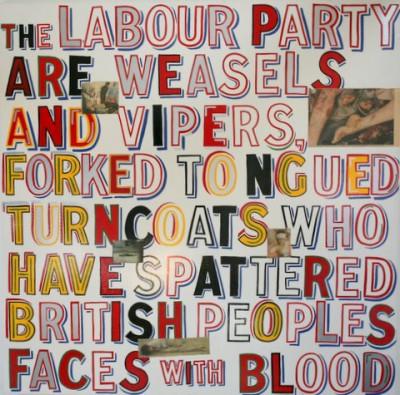 Bob and Roberta Smith is the adopted persona of the artist Patrick Brill.

After studying at the University of Reading Brill was awarded a scholarship at The British School at Rome, while still an undergraduate. Brill followed this with a MA at the conceptual hub that was Goldsmith College, London.

Patrick Brill paints slogans in a unique brightly coloured lettering style on banners and discarded boards of wood. The slogans are usually humorous musing on art, politics, popular culture, Britain and the world in general and they often support his activist campaigns, such as his 2002 amnesty on bad art at Pierogi Gallery, New York.

Noted for sign painting, Bob and Roberta Smith make a sculpture using cement, as in his 2005 Cement Soup Kitchen at Beaconsfield Gallery, London.

A sculpture proposed by Bob and Roberta Smith was shortlisted for the fourth plinth in Trafalgar Square, London

Bob and Roberta Smith makes paradoxical work in a variety of media. It is paradoxical because many of his individual pieces strike you as anarchistic and perhaps one-liners, but taken as a whole they reflect a rich, rather reassuring exploration.