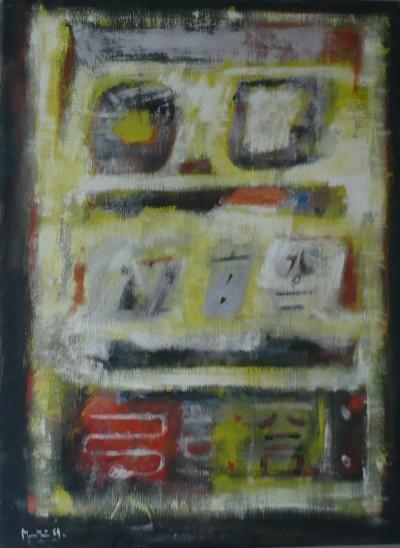 Oil on canvas
72.5 x 53 cm
Signed and dated; inscribed with the title verso

Oil on canvas
81 x 115.5 cm
Signed and dated; inscribed with the title verso

In London artistic circles, Martin Bradley became acquainted with the writers known as the ‘Angry Young Men’, and himself became known as the ‘Rimbaud of Soho’ because of his unconventional and hard-drinking lifestyle. Galleries such as Gimpel Fils and the Redfern Gallery began to exhibit his work and in 1956 he joined Gallery One.

British collectors such as Sir Roland Penrose, Sir Herbert Read and Dame Barbara Hepworth acquired works by Martin Bradley. He went to Paris in the late 1950s and was taken up by Rudolphe Augustinci, director of the Galerie Rive Gauche, who was notable for showing artists such as Max Ernst, Yves Tanguy and René Magritte.

Augustinci promoted Martin Bradley’s work in Europe; and in London, Victor Musgrave continued to exhibit Bradley’s paintings at Gallery One. Martin Bradley's work from the 1950s and 1960s is primarily abstract, with strong calligraphic and symbolic influences. Martin Bradley lived for some years between Ibiza and Paris and spent much of 1958 in Brazil on a scholarship. In 1961, after a personal crisis, Martin Bradley served briefly in the Spanish Foreign Legion, before deserting and returning to London.

In the later 1960s and early 1970s, Bradley travelled extensively in Asia and cultivated his gift as a linguist: Martin Bradley is able to speak more than ten languages including Chinese, Japanese, Tibetan and Hindi.

Martin Bradley became a convert to Nichiren Shôshû Buddhism 'which changed the whole foundation of my thinking', and has lived in Italy, France and England. Since 1954, Martin Bradley has had more than 130 solo exhibitions and his work has been collected worldwide.