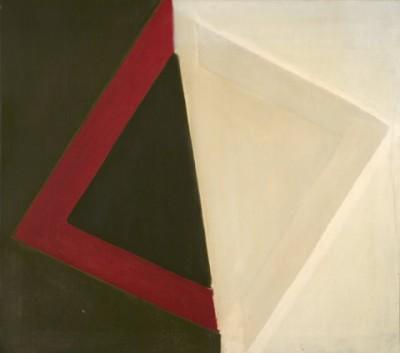 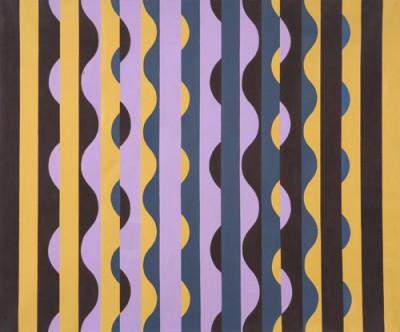 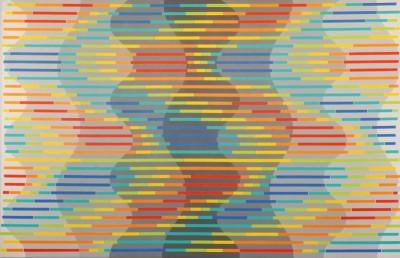 Michael Kidner was Op Art pioneer whose work was informed by mathematics and chaos theory. Most of Michael Kidner's best-known companions in Op Art – among them Bridget Riley, Jeffrey Steele and Peter Sedgley – were born in 1930 or 1931. Kidner was born in 1917, yet became a professional artist after them. He made up for a lost time: he worked until the final month of his life.

Michael Kidner was born in Kettering, Northamptonshire, where his father, Norman, was the ironmaster of works nearby. His mother and elder sister, both Kathleen, were confident and outgoing. Michael was not, and his parents dispatched him to Pangbourne Nautical College, in Berkshire, to toughen up. Instead, he drew into himself and suffered bullying; he was removed and sent instead to Bedales progressive school in Hampshire, where he flourished and, in 1939, took his degree at Jesus College, Cambridge, in history and anthropology.

While visiting his sister in the US as the war broke out in Europe, Michael Kidner enrolled at Ohio State University to read landscape architecture. However, in 1942, he crossed the border to enrol in the Canadian army. Michael Kidner was posted to England and, after D-day, saw active service in France with the Canadian Royal Corps of Signals. After demobilisation in 1946, he taught in Perthshire and began to paint.

Michael Kidner had started painting landscapes as a holiday hobby. On a visit to Provence after the war he came across a summer school run by the artist and influential teacher André Lhote at which, he later said, he first learned that a painted landscape is not a landscape. He followed Lhote to the artist's studio in Paris and studied there until 1949.

In 1949, Michael Kidner met and married an American actress, Marion Frederick, and in 1954, when he committed himself to make a living from art – which would include a 20-year stint teaching at the Bath Academy at Corsham – they bought a house and studio in north-west London. A couple of years later, Michael Kidner met the painter Patrick Heron in Cornwall. But the greater influence was Harry Thubron, a hugely talented artist and a great teacher, who propagated art as a democracy of materials and people and ideas, a construct that has nothing to do with imitation and that can be created with anything to hand and above all is not "art".

Though Michael Kidner soon settled for stripes, concentric circles, waves and moiré effects as the basis of the forms he would use throughout his career, the afterimage of colours in a close liaison that his works leave behind is, curiously, not that far away from Patrick Heron's freer, landscape-based paintings, but the disconcerting disequilibrium of Michael Kidner's work is much closer to the optical effects Bridget Riley's work achieves, though much less declamatory. Michael Kidner worked with mathematics, with chaos theory close to hand, but he never departed from the softer cadences of colour. His first solo exhibition was at St Hilda's College, Oxford, in 1959 and he was recognised as a pioneer of Op Art after 1965, when Bridget Riley's show The Responsive Eye, at the Museum of Modern Art, New York drew worldwide attention to her work and to the Op Art movement.

Later in life, his work explored the third dimension: for this he needed sculpture, and in his last decade his forms became freer and more colourful, and his works' titles freely disclosed their sources, such as interwoven roots of hyacinth bulbs, ocean currents, a lily pond. The colours in his later work are brighter but in inverse proportion to the excitement.

In 2004 Michael Kidner was elected a member of the Royal Academy.

Although stricken by ataxia and unable to walk, he would ascend to his home-based studio in Hampstead, north London, by chairlift every morning. With his hands out of commission, too, Kidner hired the artist Adrian Richardson to execute his paintings for him, just as the arthritic Pierre-Auguste Renoir had employed an assistant to execute the sculptures he designed.