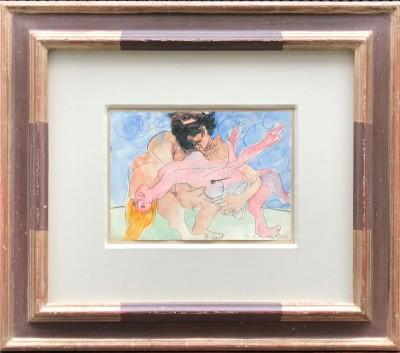 Ceri Richards was born in Dunvant near Swansea. His father conducted the local choir, with Ceri being taught to play the piano at an early age. Music and poetry formed an important part of everyday life in early twentieth-century Wales, which clearly influenced Ceri's painting, drawing and printmaking throughout his life.

On leaving secondary school, Ceri Richards was apprenticed to an electrical engineer and started to attend evening classes on the engineering drawing. He soon realised that drawing was his main interest and, in 1921, enrolled as a full-time student at the Swansea School of Art. In his final year, during a summer school at Gregynog Hall, the home of Gwendoline and Margaret Davies, Richards encountered first-hand the pictures of the modern European masters and confirmed his vocation.

After winning a scholarship to study at Royal College of Art, Richards moved to London and, in 1929, married his contemporary at the College, Frances Clayton. With the great leaps in his work that followed, his reputation as a painter grew and he held his first one-man show at the Glynn Vivian Museum and Art Gallery, Swansea in 1930.

While at the Royal College, Ceri Richards had read Kandinsky and become absorbed in the work of Picasso and Matisse. In the 1930s he had also become interested in the Surrealists, particularly their automatic techniques of creation and elements of chance. This lead Richards to adapt his subject matter and experiment with style and technique. In his experimentation, Ceri Richards made a number of relief constructions and paintings which reflected his understanding of Cubism and abstraction.

During the Second World War Richards was appointed Head of Painting at Cardiff School of Art, returning to London for good after 1945. By the end of the 1940s Richards was exploring the subject of the music room interior, usually revolving around a pianist. This was an expression of Richard's great passion for music and their mood is not always calm. This period also saw a fascination with the legend of the Sabine women, often finding expression as pictures of the women on the walls of his interior scenes.

During the 1950s and 1960s, Richards was involved in many projects, including his painting of Trafalgar Square for the 1951 Festival of Britain. Tate Gallery, which holds an example of his work, put on a major exhibition in 1981.