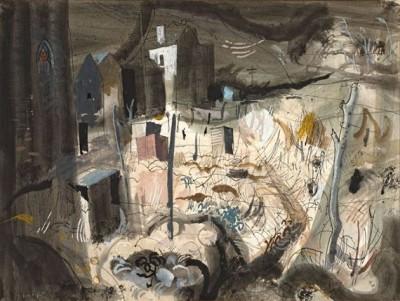 John Piper was unquestionably one of the most versatile British artists of the twentieth century, his work spanning seven decades.

The son of a Solicitor, he reluctantly became an articled clerk in his father's legal firm, but after his father's death in 1926 he studied at Richmond School of Art followed by the Royal College of Art, London. From 1928 to 1933 he wrote art criticism for the Listener and the Nation, and he was among the first to recognise such contemporaries as William Coldstream, Ivon Hitchens, Victor Pasmore and Ceri Richards.

John Piper absorbed the major movements of the 20th Century abstraction but made an individual decision to return to figuration.

John Piper is known for his extensive studies of British architecture and landscape in oil, watercolour and print, for his stained glass and tapestry, and for a wide variety of work in media ranging from ceramics to photography.

Piper was appointed an official war artist in World War II from 1940 to 1944. He was one of only two artists, the other being Meredith Frampton, commissioned to paint inside of Air Raid Precaution control rooms. Early in 1940 Piper was secretly taken to the ARP underground centre in Bristol where he painted two pictures.

180 of his works are in the collection of Tate, London. Major retrospective exhibitions have been held at Tate, London (1983–1984), the Dulwich Picture Gallery, The Imperial War Museum, the River and Rowing Museum, Museum of Reading and Dorchester Abbey.