Originally specialising in Classical Chinese Furniture, MD Flacks has become synonymous with the “scholarly pursuits” of furniture, scholar’s objects, scholar’s rocks and paintings. Through their New York gallery, which they had for 17 years as well as a number of exhibitions and fairs MD Flacks have adopted a “collectors” and “curatorial” spirit to their dealing favouring quality, rarity and integrity over quantity.
This year during Asian Art Week MD Flacks will present an exciting exhibition:

It is perhaps difficult to imagine any great similarities between London in the 1960s and Suzhou in the 1560s and perhaps harder still to find them in the great Ming literatus Wen Zhenheng (1585 – 1645) and the master of Pop sculpture Clive Barker (born 1940) and yet, with a little artistic latitude, they are there!

Clive Barker, who had studied as a painter, first found inspiration in the works of the Surrealist masters. He was particularly taken with Marcel Duchamp’s concept of “ready-made” art, that is pieces of everyday life that could be transformed into art just by exhibiting them. This was an evolution of the “object trouve”, normally a natural object that was considered worthy of artistic appreciation in its “as found” condition. This idea, quite radical in western art, was much more common in Chinese art where objects such as scholar’s rocks and root sculptures were appreciated and collected for over 1,000 years.

Moreover, Barker was particularly interested in transforming the “as-found” into art by ultimately casting it in metals, often with beautifully polished surfaces. This idea of man and nature or mundane object again is common to scholar’s rocks that were often harvested or found and then edited by man to create the final work of art. The Chinese scholar’s in the Ming and early Qing dynasties (16th-18th centuries) were also fond of creating scholar’s objects and playthings in very expensive materials (bronze, lacquer, cloisonné, ceramics) that took the form of very humble and often mundane objects, such as nuts, branches, fruits, lingzhi fungus etc.). Clive Barker’s interest in turning the mundane into a work fit for artistic appreciation, exemplifies an eye that is always alert to beauty and aesthetics, in everyday objects. He has always wanted to challenge people to look and always looks with utter focus, trying to find and unlock the artistic force inside any objects.

Another aspect of Clive Barker that has some connection with the Chinese artistic sentiment is his deep love and understanding of art both past and contemporary to his own. In his works, he often pays homage to artists and works that have particularly touched him as can be seen in his Homage to Magritte or Van Gogh’s Chair. These playful homages to other artists were commonplace in Chinese culture where artists were trained by copying the works of earlier masters and also often alluded to works by other artists either by subject matter, title or inscription. This idea of the communion of artists that was common in late Ming China was also a factor in the arts of the 1960s and 1970s where artists often formed close-knit groups. London at this time was no different and Clive Barker had longstanding friendships and interactions with his contemporaries, particularly Francis Bacon, Lucien Freud, David Hockney, Henry Moore and Peter Blake.

In his artistic evolution, Barker happily credits the influences of past masters as Magritte and Duchamp as well as his contemporaries such as Jim Dine. Barker’s work has been greatly influential and artists such as Jeff Koons attribute particular importance to his body of work. Though Barker was not a self-promoter or seeker of the limelight, he is one of the few sculptors of the period who have been able to create an ever-evolving body of work that always combines innovation, evolution and integrity. Clive Barker is hard to pigeon-hole, part pop artist, part surrealist, part social commentator, part idiosyncratic innovator; he is hard to place because he is essentially a man who is driven by the visual experiences that he encounters and the desire to share those through his art. He has not changed to follow trends but rather changed because of what has inspired him. Such artistic integrity over 5 decades is a very unusual thing.

Clive Barker’s interest in Chinese culture was born from early friendships in the 1960s with dealer Giuseppe Eskenazi and restaurateur Michael Chow. Creations inspired by these friendships include Tang Horse, 1973 and Tang Chariot, 1973 both based on an 8th-century terracotta tomb figure as well as the more playful Three Peking Ducks, 1969.

In 2015, a chance meeting at Alan Wheatley Art of Marcus Flacks, the leading specialist of Classical Chinese Art with Clive Barker, allowed Clive to be introduced to Chinese Scholar’s rocks and Scholar’s Objects. His reaction to them was both spontaneous and entirely intuitive. It was a world he had been introduced to years before, but that had waited many decades to re-imprint itself on his artistic psyche. Thus a new journey into the world of the Chinese Scholar was born and the early results are as extraordinary as they are diverse. Part of the success of these works lies in Clive Barker’s unique talent of transforming things without subverting what makes them interesting or special, but rather enhancing and championing these qualities. The ever-changing surfaces of his highly polished pieces are in perfect harmony with the Chinese view that each rock, for example, is a work of constant evolution rather than a constant. The time frame of their evolution (millions of years) just does not fit into our fleeting ones. But in Clive Barker’s rocks, we see the evolution and change reflected in the ever-changing surfaces as if the inner life-force (Qi) of these powerful objects has been unlocked by his alchemy. 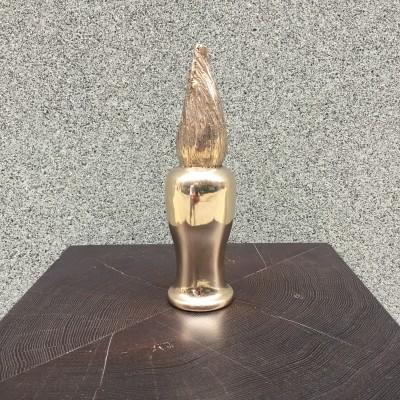 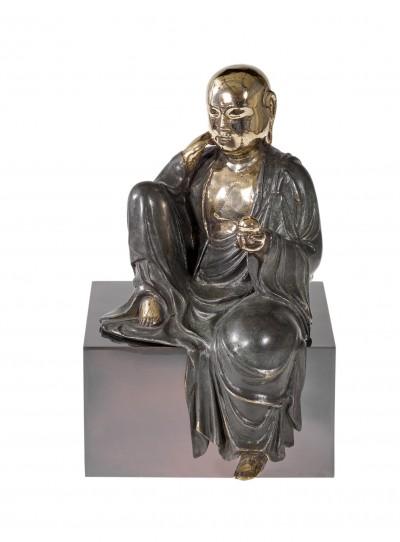 Polished, heated and painted bronze
30 cm high
Conceived in 2016 and cast in an edition of 8 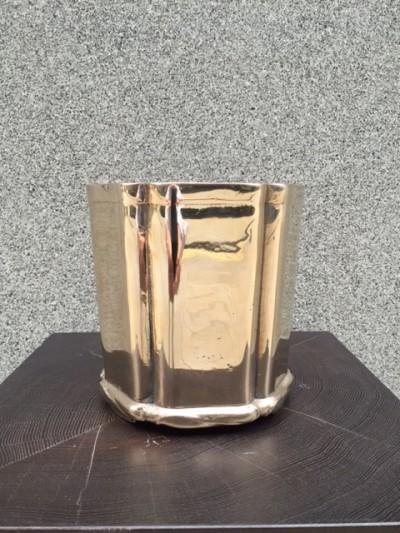 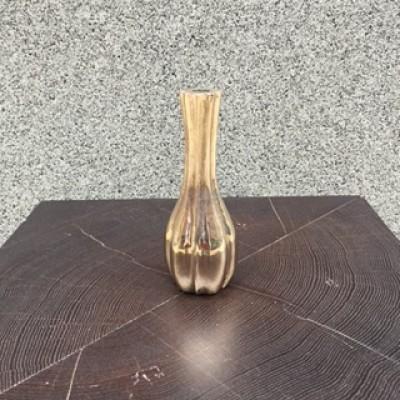 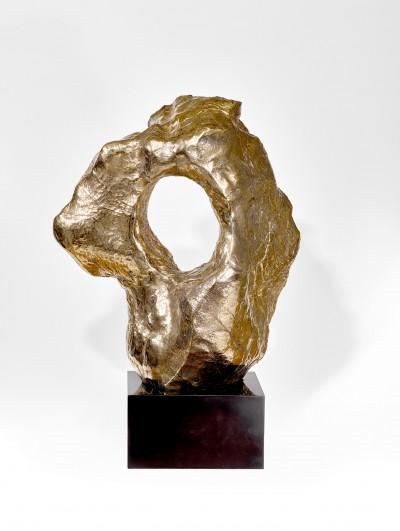 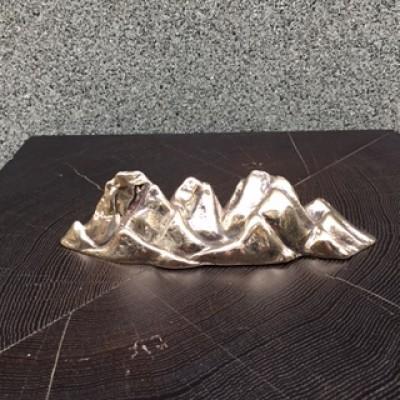 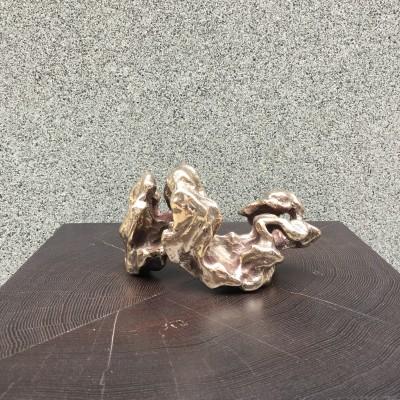 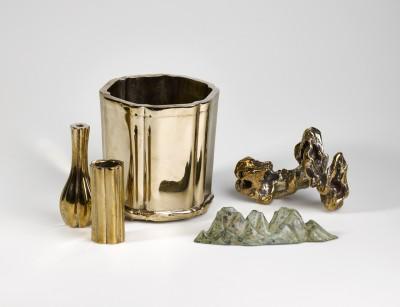 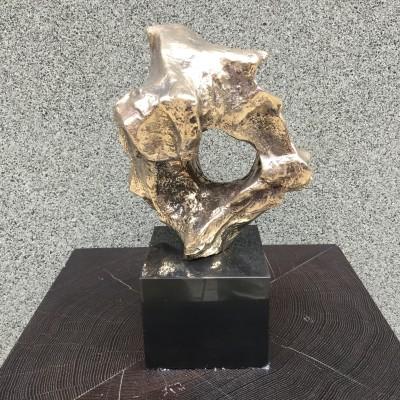 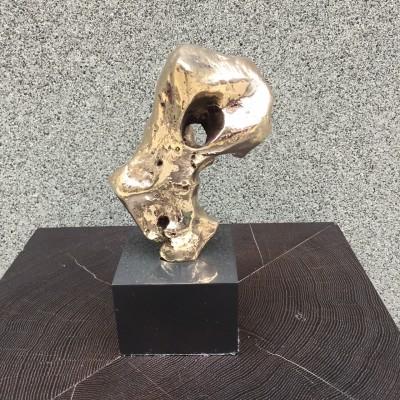